The Dr. Harold and Beverly Maurer Scientific Achievement Award is a $10,000 grant awarded to a promising early career scientist or clinician.  The award is named after the Maurers, who have been longtime supporters of UNMC’s research enterprise. Dr. Maurer served as UNMC chancellor from 1999-2014. Beverly Maurer is a founding member of Nebraskans for Research which merged with Nebraska Cures and formed the organization that exists today.  $60,000 has been invested in local research since the award began in 2015. 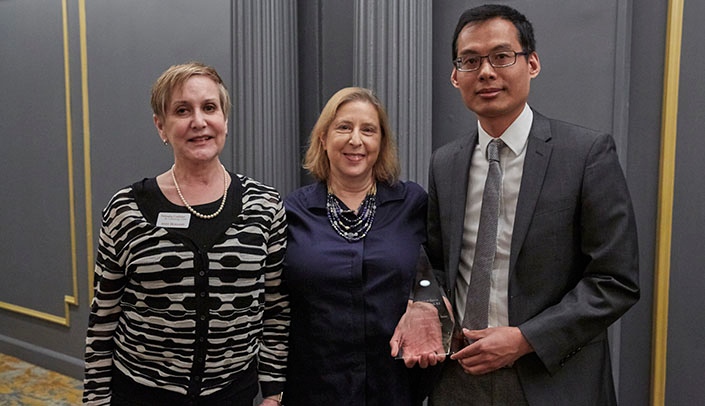 By Tom O’Connor for UNMC Today

The award is named after the Maurers, who have been longtime supporters of UNMC’s research enterprise. Dr. Maurer served as UNMC chancellor from 1999-2014. Beverly Maurer is a founding member of Nebraskans for Research which merged with NCLC and formed the organization that exists today.

A biomedical engineer, Dr. Xie is an associate professor and research scientist in the UNMC Department of Surgery-Transplant and is part of the Mary and Dick Holland Regenerative Medicine Program.

His research is aimed at gaining a better understanding of materials and cell/tissue interaction and for developing a better design of biomedical devices/materials for use in health care. He also is involved in the development of novel formulations for local drug delivery.

James Turpen, Ph.D., a member of the NCLC board who retired from UNMC in 2017 after serving as professor in the UNMC Department of Genetics, Cell Biology and Anatomy and as associate vice chancellor for academic affairs, presented the award to Dr. Xie.

Dr. Turpen said, “Dr. Xie epitomizes the goal of this award, which is to recognize outstanding mid-career faculty whose research has the potential to lead to lifesaving cures.”

In 2017, he also received a four-year, $1.3 million grant from the National Institutes of Health to study the nanofiber-based local delivery of immunomodulating compounds for prevention of surgical site infections (SSIs).

The nanofiber sutures contain vitamin D, which is thought to be able to induce production of an infection-fighting peptide at the surgical site. If proven successful in transgenic mice, the nanofiber sutures could represent an important advance in the prevention of SSIs, a multibillion-dollar challenge each year in the United States.

Dr. Xie is currently working with Mark Carlson, M.D., professor, surgery-general surgery, to try to develop a hernia mesh, which would allow human tissue to grow into the mesh and form firm attachments to it. In essence, the body would absorb the material, thus reducing the risk of infection and strengthening the native tissue.

The team will test the mesh in porcine models in hopes of heading toward FDA testing and approval.