One of Omaha’s most devoted couples – Carol and Rick Russell – received the annual Lifesaver Award on April 29 at the 17th Annual Spring Tribute Luncheon for the Nebraska Coalition for Lifesaving Cures (NCLC) at Happy Hollow Club.

The award is given each year by the coalition to recognize individuals who have made a difference in the world through their passionate support of medical research.

“Rick and Carol have been steadfast supporters of research and the university as a whole,” said Victoria Kohout, executive director of the NCLS. “They’ve been with us from the very beginning and are so deserving of this honor. It was our pleasure to recognize them for their tremendous commitment.”

Carol earned a master’s degree in pathology from the University of Nebraska-Lincoln and went on to work as a medical technologist for several years in the UNMC lab of Rashid Al-Rashid, M.D., the first pediatric hematologist/oncologist in Nebraska.

She was one of the founding members of Nebraskans for Research (NFR), a grass roots support group which was formed when UNMC’s fetal and stem cell research programs were under attack by research opponents. NFR merged with NCLC in 2007 and the combined organization continued under the NCLC name.

Carol’s volunteerism in the community is legendary, Kohout said. Among the countless organizations she has served include the University of Nebraska President’s Advisory Council, the Midlands Latino Community Development Corporation, Children’s Square U.S.A., the EngAge Wellness program at the Home Instead Center for Successful Aging at UNMC, the Nebraska Children and Families Foundation, the NET Foundation, and the Legislative Task Force on Human Trafficking.

“I feel like I’m getting the Academy Award for Best Supporting Actor,” he joked.

But, Rick’s accomplishments are plentiful as well. He is president and CEO of Millard Lumber Inc., a company founded by his father in 1948. He also has served on numerous boards including the UNMC Board of Counselors, the Peter Kiewit Foundation, the Metropolitan Omaha Builders Association, Children’s Hospital & Medical Center, the Omaha branch of the Federal Reserve Bank of Kansas City, and the Alliance for Business Ethics.

Rik Bonness, a previous recipient of the Lifesaver Award in 2005, introduced the Russells at the  luncheon.

“Research is personal to Carol and Rick’s family, as it is for mine,” said Bonness, an Omaha attorney who has two sons with type I diabetes. “Several years ago, their son, Mark, was in a serious accident. When Rick and Carol arrived at the hospital, they were told Mark might not survive.  He was suffering from inner cranial swelling.  But, thanks to advances in medical research to treat his condition, he did survive – and is here today to help us celebrate his parents.”

He added, “Rick and Carol have provided powerful voices in our community to make lives better – and to save lives – through the miracles of medical research.” 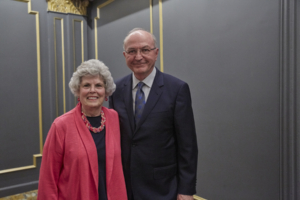 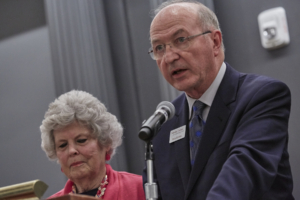 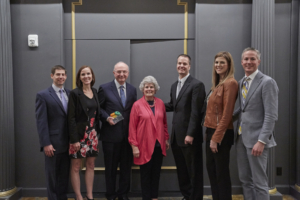 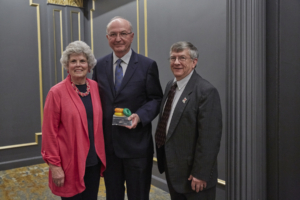